April 2, 2016, I discovered the power of Cosplay. I attended Collective Con as “Michonne” from my favorite show, The Walking Dead. I did it primarily to see my friend Cecil Garner aka Rick Grimes. He is an award-winning cosplayer from Walker Stalker,  one of the biggest conventions in the world. At first, I was going to dress as Katana from Suicide Squad but after much consideration, I decided to cosplay as “Michonne”.

To explain a little of what Cosplay is, it’s like Halloween. You dress up in elaborate costume and live out your favorite character. The difference in Cosplay is that you are not just dressing up. You live as that character.  You must know every nuisance and detail of their life. For example, as I stood in line for my food,  fans from the Walking Dead show asked me questions as Michonne, not Shellane. It was actually kind of cool. All of those pull-ups and cleans developed my physique as the tough feminine badass as Michonne. My costume and katana were exact duplicates of her character. My goal was to be as authentic as possible. From the look of my picture with “Rick, looks like I nailed it. 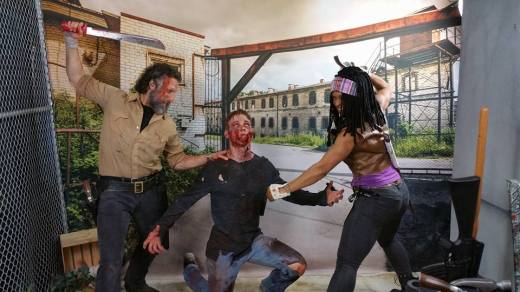 I had so much fun that day, I decided I am going to pursue this new hobby. Let’s see where it takes me. Besides, CrossFit, got me this body why not have a little fun with it?